The is now a project for marker L1335 (also known as S530) a branch of haplogroup R1b at Family Tree DNA administered by Robert Hughes http://www.familytreedna.com/public/R1b-L1335/

This SNP (Single Nucleotide Polymorphism) is a marker which notates the group commonly known as STR47-Scots or the 'Scots Cluster'.  The marker is found particularly in western Scotland, but also as far north as the Orkney Islands and Sutherland.  There is also a cluster emerging in Wales.  The results page can be found here http://www.familytreedna.com/public/R1b-L1335/default.aspx?section=yresults

You can see where L1335 fits in the bigger picture of Haplogroup R1b via this diagram produced by the chaps in the R1b-P312 Haplogroup and Subclades Y DNA group at Yahoo.
R1b-L21_Descendency_Tree.jpg 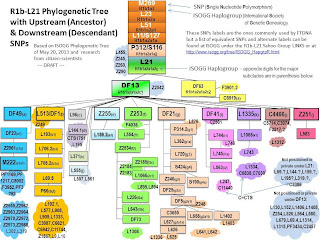 A new project has been launched covering the counties of Caithness and Sutherland hosted by Family Tree DNA.

The project is open to both males and females who have a direct lineage back to the above areas on their paternal or maternal side.  The project also takes results for individuals who have taken the Family Finder test and who have ancestors from Caithness or Sutherland.

The name Caithness is derived primarily from a tribal rather than a place name and appears to have been given to the indigenous people in question, 'the Cats' by their Celtic-speaking neighbours.   (Ref: Professor Bill Nicoliasen in, Baldwin, John. R. ed. (1982) Caithness - A Cultural Crossroads. Edinburgh: Scottish Society for Northern Studies).

It has been argued that the 'province' of Strathnaver likely equates to these 'dales' and should be seen as part of the earldom lands of Caithness.  (See: Baldwin, John. R. ed. (2000) The Province of Strathnaver. Edinburgh: Scottish Society for Northern Studies).

The project will cover that part of north-eastern Scotland inhabited by 'the Cats', namely present day Caithness (Katanes), Sutherland (Sudrland) and the 'Dales' (Dalir) which equates with the Diocese of Caithness in the Middle Ages.

If your lineage in the direct line comes from these counties please participate via the join link at the top of the project page http://www.familytreedna.com/public/Caithness/default.aspx 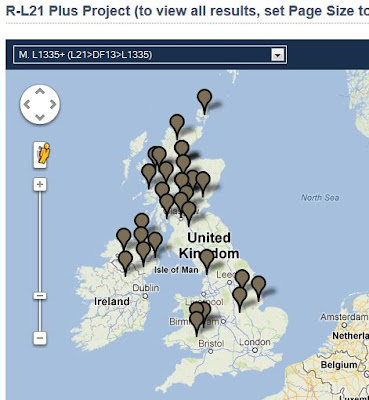 There has been some rather negative press coverage about DNA testing in recent weeks resulting from outrageous claims by one British testing company in particular.  Headlines that individuals are related to the Queen of Sheba, castrated Irish slaves, Napoleon or are descendants of Romans have been made without any data being published in peer reviewed journals.

Unfortunately this publication was selectively quoted by the media tarring genealogical DNA testing with the same brush.

In order to bring some balance back into the conversation Debbie Kennett, well known to many within the genetic genealogy community has been given the opportunity to complement the Sense About Science article.  In a blog post on their website she provides further details about DNA testing for genealogical purposes and why it can be used effectively and legitimately as an additional tool in family history research.

You can read her article here:
http://www.senseaboutscience.org/blog.php/41/sense-about-genealogical-dna-testing

Debbie Kennett administrator of the Devon DNA Project (the county) and the Cruwys DNA Project has put together a great summary of the forth coming ancestry test developed by the Genographic Project and Family Tree DNA. The test looks at markers from Y-DNA, mtDNA as well as autosomal DNA and will complement tests currently available at FTDNA.

It looks as though this test will be a replacement for the Y-DNA 'deep clade' currently used for deep ancestry. This is an exciting development for those of us interested in deeper ancestry and time frame when surnames were becoming adopted and hereditary.

Indications are that you will be able to purchase and link the product to your FTDNA account, so hold fire on ordering direct if you have a Family Tree DNA account until this is clarified.

Debbie also weighs up how the test might impact on other companies such as Ancestry and 23andMe.

With thanks to Debbie for putting together such a comprehensive blog.

New editor for the Journal of Genetic Genealogy (JoGG)

The editorial board of the  Journal of Genetic Genealogy (JoGG) has announced that it's new editor will be Dr. Turi King. With thanks to Ann Turner who has posted the following on the DNA Genealogy mailing list at Rootsweb:

Dr. King's PhD thesis topic was The relationship between British surnames and Y-chromosomal haplotypes and she is also co-author (with George Redmonds and David Hey) of the book Surnames, DNA and Family History http://ukcatalogue.oup.com/product/9780199582648.do

Dr. King is currently a Research Fellow in the Department of Genetics and the School of Historical Studies at the University of Leicester, where she is the project manager for an interdisciplinary project The Impact of Diasporas on the Making of Britain http://www2.le.ac.uk/projects/impact-of-diasporas/the-research-group/research-associates/turi-king

Turi has worked on the Y chromosome since 1996 and has concentrated on surnames, the Y chromosome and genetic genealogy (among other studies) for over ten years. More details about her background and interests can be found at http://www2.le.ac.uk/departments/genetics/people/king/turi


The last issue of the Journal (Fall 2011) had an article of Scottish DNA interest:
The Evolution of the Gordon Surname:  New Insight From Y-DNA Correlations and Genealogical Pedigrees by Tei A. Gordon and William E. Howard III.

Update on the status of the Sorenson Molecular Genealogy Foundation and GeneTree.

Have you sent a sample to SMGF in the past? Have you been waiting for them to release material on autosomal data?

Steven Perkins has posted on his On-line Journal of Genetics and Genealogy that he has had a reply from SMGF regarding the future of their database and GeneTree since it was acquired by Ancestry.com.

You can read the reply from SMGF here:

Note for individuals who have tested with www.genetree.com (which is no longer taking orders) - "There are not plans to automatically 'convert' GeneTree accounts into Ancestry.com accounts, so GeneTree customers will need to move their information over to Ancestry on an individual basis." 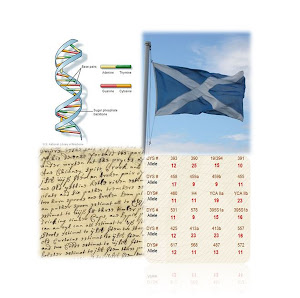